The conductivity test provides a measurement of electrolyte leakage from plant tissues and was first recognized by Hibbard and Miller (1928). It was later developed into a routine vigour test to predict field emergence of 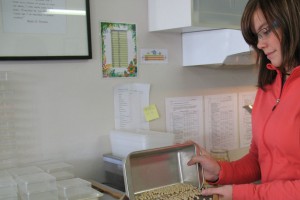 Since then this test has been accepted for addition into the ISTA rules for seed testing and is one of two ISTA recommended vigour tests. Conductivity is also a recommended Vigour test of the Association of Official Seed Analysts, Seed Vigour Testing Handbook, Contribution No. 32.

Conductivity test results can be used to rank vigour lots by vigour level. This information has been used for several years for garden peas in the United Kingdom and is interpreted as follows (Matthew and Powell, 1981)

More recently the test has seen much work on Canola varieties in Canada by Dr. Bob Elliot of Agriculture Canada. His studies suggest conductivity under 35 uScm-1g-1 is vigorous.

Seed Check Technologies Inc. will report your conductivity vigour in uScm-1g-1 and will report the corresponding ranking above (for Pea).

Seed Check Technologies Inc. has seed technologists who have recent training in Conductivity testing from Matthews, Powell, and TeKrony at the ISTA Vigour workshop in South Dakota June 2002.